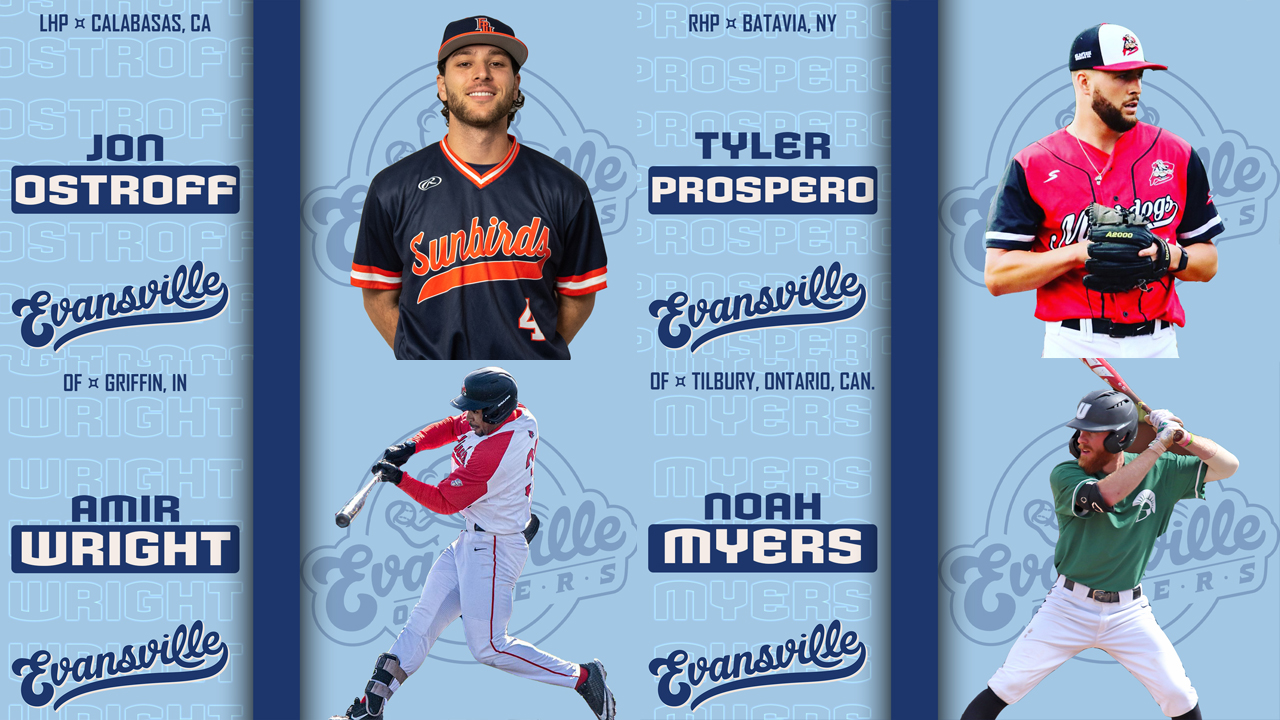 EVANSVILLE, Ind. - The Evansville Otters announced the signing of four young players to the 2023 squad on Friday.

Jon Ostroff is a left-handed pitcher from Calabasas, California. Ostroff played five years of NCAA baseball, beginning with four years at George Mason University in the Atlantic 10 Conference. While with the Patriots, Ostroff appeared in 23 games. He then completed his collegiate career in 2020 at Fresno Pacific in the NCAA's Pacific West Conference.

Last year, Ostroff began his professional career in the Pecos League with the Tucson Saguaros. In his 13 relief appearances, he had a 1-0 record and 1.98 ERA, averaging about a strikeout per inning pitched.

Tyler Prospero also joins the pitching staff, a righty from Batavia, New York. Prospero spent three years at Niagara University, where he helped the Purple Eagles to a second-place finish the in the Metro Atlantic Athletic Conference in 2020. In his 27 career appearances, he clocked a 7.11 ERA and a 2-0 record.

During the summer of 2022, Prospero played in the MLB Draft League for the Williamsport Crosscutters. During this time, he appeared seven times, putting up a 3.52 ERA in just over 15 innings of work.

Amir Wright is an outfielder from Griffin, Indiana. Wright began his college career in the Division II ranks with St. Joeseph University. After a successful year, he transferred to St. Leo University, a DII school in Florida. He spend four years with the Lions, highlighted by a 2020 season when he recorded a .410 batting average in the shortened season. Wright's collegiate career concluded in 2022 when the outfielder returned to Indiana for a season with Ball State.

In the summer of 2022, Wright played his second season in the MLB Draft League, putting together a .338 batting average across 37 games with the Frederick Keys.

Noah Myers is an outfielder from Tilbury, Ontario, Canada. Myers was drafted by the Toronto Blue Jays in the 30th round of the 2019 MLB June Amateur Draft out of Wabash Valley College in Mount Carmel, Illinois. After spending the summer of 2019 in the Cape Cod League, Myers attended South Carolina where he played alongside Otters' shortstop George Callil. He conclude his collegiate career in 2022 at USC Upstate, putting together a .317 batting average in his 58 games.

Season ticket packages are on sale now for the 2023 season. Individuals who pay in full by March 1 are eligible for exclusive season ticket holder benefits. Find more information here or call us at (812) 435-8686.

Group and single-game tickets will go on sale in the Spring.