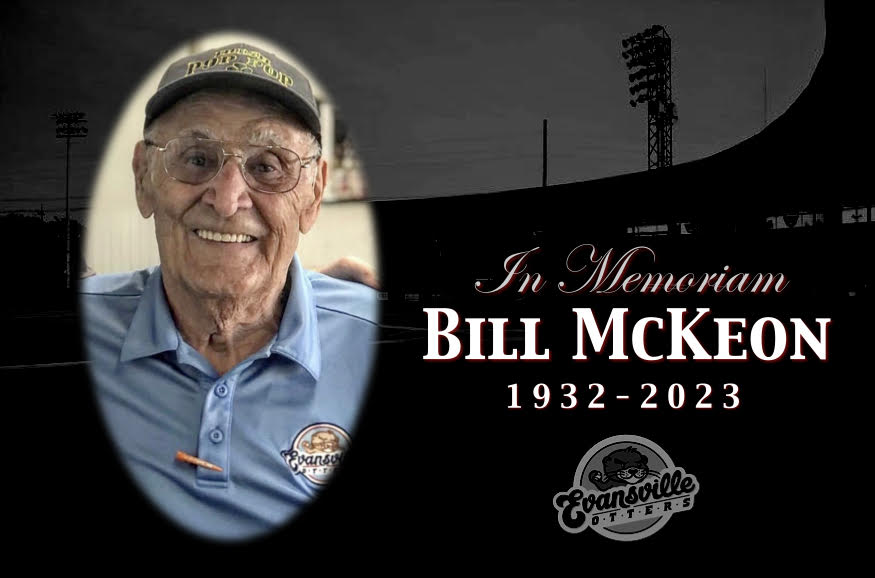 EVANSVILLE, Ind. - The Evansville Otters are mourning the death of radio analyst Bill McKeon, who died after a brief illness Friday surrounded by his family at age 90.

McKeon witnessed a lot in 70 years working in baseball. He experienced the game from every perspective - as a player, coach, scout, manager and broadcaster.

His time with the Otters began as an advisor before shifting to the dugout, where he served as a bench coach. McKeon was also interim manager for the franchise in 2010, preceding manager Andy McCauley for two games and finishing with a 1-1 record.

McKeon shared several stories with family and friends from his experiences scouting for the Kansas City Royals and San Diego Padres after a five-year minor league career that included two seasons in Evansville playing for the Milwaukee Braves’ Class B affiliate in the Three-I League.

Many of his fondest memories come from his playing days with Evansville in 1956 and 1957 at Bosse Field. One moment in particular always stuck with McKeon.

“Probably one of the greatest nights I ever experienced was with the Evansville Braves in 1956,” he said during Bosse Field's centennial celebration. “We were winning the pennant by about 28 ballgames.”

As a reward for the Braves’ success, a local furniture store owner gave each player and the team’s manager, Bob Coleman, a $5 gift certificate to his store.

Braves’ General Manager Austin Brown had also coordinated with the furniture store to give Coleman an easy chair.

“It was brought in on an Evansville Fire Department truck with the siren blasting,” McKeon said. “A weird occasion, put it that way.”

McKeon’s skipper was not pleased about the spectacle taking place at Bosse Field.

“He said ‘what the hell is Brown doing now?’” McKeon said. “Coleman was nothing but baseball from 12:01 in the morning to 11:59 in the evening - if he weren’t talking, thinking and playing baseball there was nothing else in life.

“He was kind of disturbed - here comes the fire truck and of course he didn’t know what was going on.”

Before the ceremony began, Brown had approached McKeon about being the team spokesman in front of the fans to present Coleman the easy chair. A microphone was dropped down by the cord from the old press box that sat on the roof overlooking home plate and McKeon did what he does best, finding words to describe his true feelings and thank his manager on behalf of his teammates.

After McKeon said a few kind words, it was Coleman’s turn to talk.

“I handed him the microphone and his first words to the fans sitting in the ballpark was, ‘Ladies and gentlemen, if we weren’t winning the pennant by 28 games, McKeon would not be here witnessing this because he drove me crazy all year long,’” McKeon recalled, laughing. “That’s probably one of my greatest memories of Bosse Field.”

Though McKeon wasn’t from Evansville originally, playing at Bosse Field had a profound impact on his life.

While with the Braves, he met a local girl, Elizabeth Unfried, at a local swimming spot July 4, 1956 and asked her on a date to watch Tommy and Jimmy Dorsey at the amphitheatre.

She said yes and less than two months later, they were engaged. They married the following February.

“From there on, we were together all the time,” McKeon said. “She came to the ballgames, although let me say this, in all honesty not only did she come to see me but her brother (Joe) was the left fielder so she came to see him.”

After the wedding, they moved to Bill’s home state of New Jersey. They moved back to Evansville in 1987 to be with Elizabeth’s side of the family, who still lived in town.

In addition to his time with the Otters, he helped found "Friends of Bosse Field" in 1992 with his brother-in-law and that organization remains today, now called the Tri-State Hot Stove League.

The Otters extend their deepest thoughts and prayers to Bill's wife, Elizabeth, his children and the McKeon family.