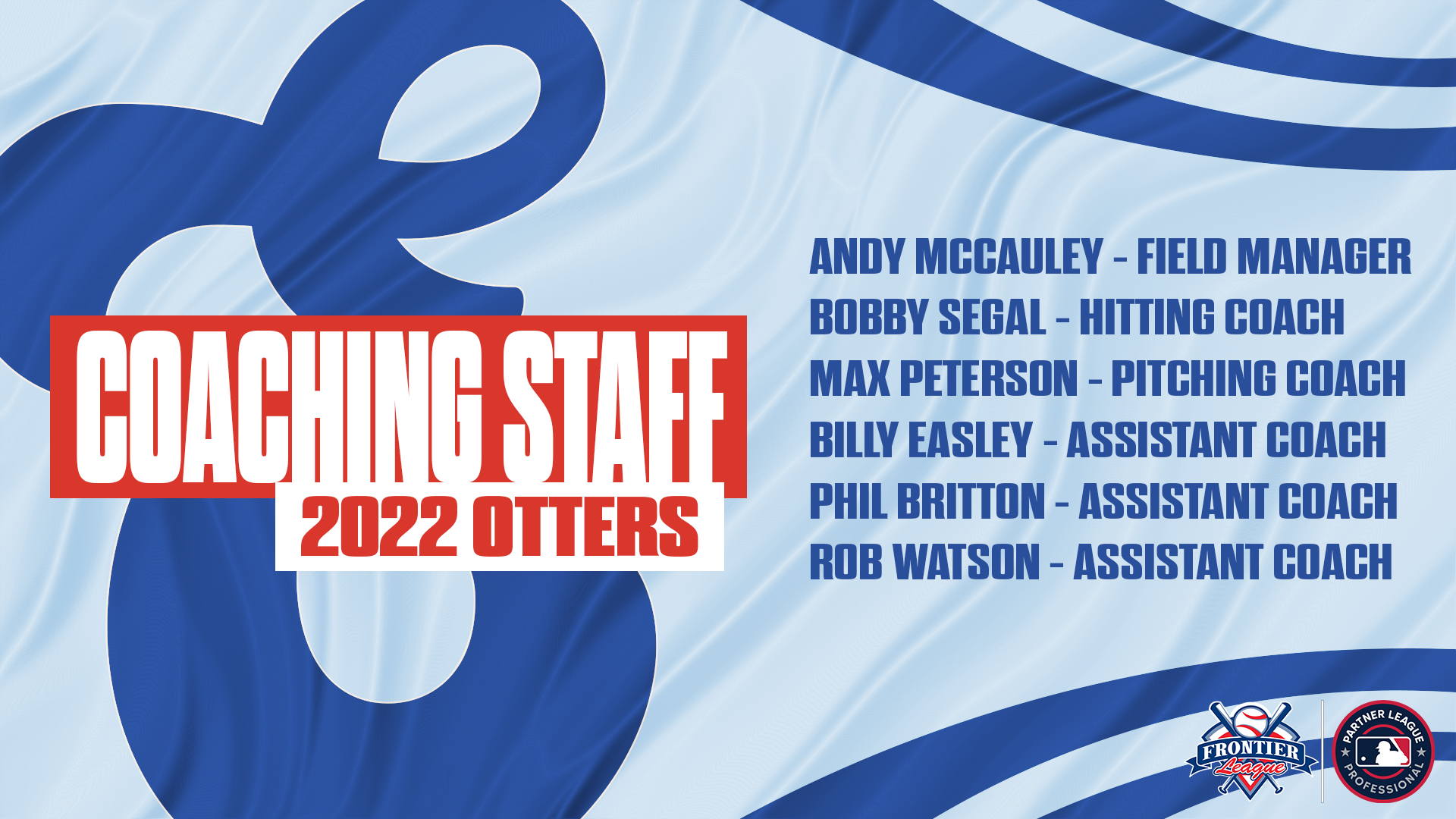 EVANSVILLE, Ind. - The Evansville Otters and manager Andy McCauley announced the team will have its familiar names returning to the coaching staff and in the dugout for the 2022 season.

Boots Day, who retired as Otters bench coach after the 2021 season, will make visits to Bosse Field on occasion including for Spring Training.

Evansville just missed out on a fifth consecutive appearance in 2021, coming up a half game shy of Florence in the West Division standings last season.

McCauley is entering his 13th season as manager of the Otters. In 12 seasons as the Otters’ skipper, McCauley has guided the club to five postseason appearances and a league championship in 2016 and has set franchise records in games managed (1,006) and wins (531).

In 2021, McCauley reached a couple of milestone marks, recording his 500th win as the Otters’ skipper and his 1,000th overall professional managerial win.

McCauley is a two-time recipient of the Roger Hanners Frontier League Manager of the Year award, receiving the honor in 2014 and in 2021.

In 2021, McCauley guided the team to a franchise-tying record of 57 regular season wins for the second consecutive championship season.

McCauley credits the consecutive seasons of winning and success on the field due in part to the hard work of his coaching staff and having the stability of the staff.

Bobby Segal will be in his seventh season with the team as hitting coach this summer. Segal, an Indiana University graduate, served as a collegiate hitting coach for nine seasons and a summer coach for five years before joining the Otters in 2016.

“Bobby does an outstanding job with the hitters,” McCauley said. “His tireless work ethic mixed with his knowledge and winning resume are the perfect combination for any level of professional baseball. We are very fortunate to have Bobby. He also is a big part of player procurement. His past connections with college coaches, collegiate summer leagues and the American Association are all useful avenues we have used in past seasons.”

Max Peterson returns to Evansville for his ninth season as pitching coach. Peterson, a San Diego native, was hired in 2014 after a five-year playing career that included time in the Oakland A’s and Chicago White Sox organizations.

The Otters have seen several pitchers get signed to MLB-affiliated organizations since Peterson’s arrival in Evansville, including two in the last year with Dalton Stambaugh signing with the Chicago Cubs organization and Braden Scott signing with the Toronto Blue Jays organization. Brandyn Sittinger, who pitched under Peterson’s tutelage for the second half of the 2019 season, made his MLB debut with the Arizona Diamondbacks last September.

“Max does an outstanding job with our pitching staff,” McCauley said. “He is a very talented evaluator and good communicator within his staff. Max is an integral part of finding talent as well as developing his pitchers.”

In 2019, Peterson was given the Darren Bush Frontier League Coach of the Year Award. Peterson’s guidance led six Otters’ pitchers to being signed to MLB affiliated organizations.  Peterson also led the Otters’ pitching staff to a franchise single season record of 868 strikeouts, which led the Frontier League. The franchise’s last record-setting mark was 832 in 2017.

Assistant coach Billy Easley will enter his second season on the staff, specializing in catcher instruction.

“Easley does great work with our catchers with instruction and fundamental drills defensively, including the work our catchers do to execute a game plan with our pitching staff,” McCauley said.

Rob Watson and Phil Britton will continue their roles as assistant coaches specializing in player procurement and defensive fielding instruction.

Watson was on McCauley’s first staff in Evansville during the 2010 season and served as an acting manager during the 2017 postseason.

“Rob is the longest continuous coach on my staff and is a very big help in the short spring training period,” McCauley said. “He is a very good evaluator of hitters and infielders, and his input is heavily relied upon with our final roster decisions. Rob is also a big help with player procurement, having strong ties in Southern California and around Oklahoma.”

Britton played under McCauley with Evansville in 2011, finishing the season with two home runs and 15 RBIs.

“Phil is another outstanding catching instructor on our staff that we have been lucky to retain,” McCauley said. He is an outstanding technician and teacher at one of the toughest positions in all sports.”