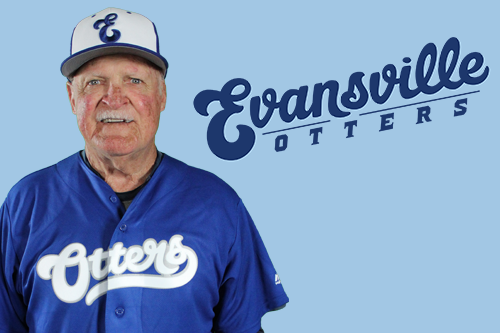 EVANSVILLE, Ind. – The Evansville Otters have announced that bench coach Boots Day will retire at the conclusion of the 2021 Frontier League season.

Day was the Otters’ inaugural field manager in 1995 and has been bench coach under current manager Andy McCauley since 2012.

The former Darren Bush Frontier League Coach of the Year has carried a career in professional baseball for over 55 years.

“It’s been really special and meaningful to be in professional baseball for this long,” Day stated.

Day joked, “I’ve always kept on my toes with job security over that time, working 55 one-year contracts in my career.”

The Evansville Otters organization alongside Frontier League Commissioner Emeritus Bill Lee recognized Day earlier this season with a presentation for his 55 seasons in professional baseball.

“It’s good to celebrate this with my friends and family,” Day said. “It’s great to share the moment with them.”

Day’s storied career in professional baseball began 56 years ago in 1965 with the St. Louis Cardinals organization.

Day began his professional career in St. Petersburg, playing in the Florida Instructional League in 1965. He won his first pro-ball championship with the Arkansas Travelers in 1968, where Day led the club in batting average (.295) and home runs (17).

Day made his major league debut on June 15, 1969, with the Cardinals, made the Chicago Cubs Opening Day roster under Hall of Fame manager Leo Durocher ahead of the 1970 season, and went on to spend 1970-1974 with the Montreal Expos. Day played under three hall of famers.

"Boots' career is so entwined with minor league baseball in Evansville that we often forget he was a fine major league player,” Otters owner Bill Bussing said. “He and Rusty Staub were a formidable duo for the Montreal Expos in the early seventies."

He also played for the Evansville Triplets from 1975-78, winning the Junior League World Series in 1975. Day also spent time as a coach and scout in the Tigers organization. He later worked in the Yankees system between 1990-1991.

After spending three seasons in the Kansas City Royals Organization as a scout, Day’s coaching career brought him back to Evansville in 1995, when he was asked to lead the Evansville Otters as the fledgling ball club's manager in its inaugural season.

After the 1995 season, Day ventured to spend time as a coach in the Cleveland Indians organization.

Day then returned to the Cardinals organization for another six-year tour, including time under Tony La Russa, and then heading to the Royals organization.

“Boots has been such a big part of our success here in Evansville since his return in 2012,” Otters manager Andy McCauley said.

“His baseball experience and knowledge has impacted not just the players but the coaches and me. He’s been a trusted sounding board, assistant, and friend for me. There isn’t much he hasn’t seen on a baseball field. I still read Boots’ five rules that he created from his experiences to all players the first day of Spring Training.”

2021 marks Day’s 55th season in professional baseball, having instructed, played with, for and against numerous Hall of Famers. Day is a member of three Hall of Fames in his own right, as the Greater Utica, Mohawk Valley, and Illion Hall of Fames have each inducted Day for his monumental achievements in the game of baseball.