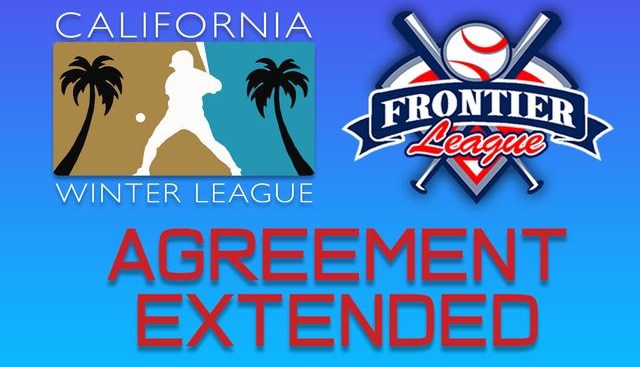 “We were eager to work with a professional baseball league in 2015 to ensure that California Winter League players had the best opportunities anywhere in the world and we are so excited that it has turned into a 7 year relationship with the Frontier League that has seen CWL players become Rookies of the Year, All-Stars, and Champions in the Frontier League,” said CWL General Manager Justin Reschke. “Working with a professional league that focuses on player advancement and quality of play is always a priority for us and therefore it makes perfect sense for us to extend this agreement to be the Official Winter League of the Frontier League once again.”

“We are excited that we will continue working closely with the California Winter League” commented Deputy Commissioner Steve Tahsler. “The past six years of our relationship have proven beneficial to our teams in finding quality players and to players in proving them an opportunity for exposure as they look to begin or further their baseball careers. Being on-site for the CWL each year I can attest to the first-class operation they present. With over a dozen MLB teams scouting the CWL in person each year plus the participation from Atlantic League, American Association, and USPBL managers in addition to the Frontier League the CWL easily offers players the best opportunity to be seen by the largest number of talent evaluators in both workout and game situations”

The California Winter League will begin its 12th season with players reporting on Monday, January 18th, 2021. The league will feature MLB Scout days and live games over the course of its month-long season, concluding with the CWL Championship on February 14th. Players interested in playing in the CWL can register at CaliforniaWinterLeague.com and find more information on Twitter (@CalWinterLeague), Instagram (@CaliforniaWinterLeague), or Facebook.

Founded for the 1993 season, the Frontier League is the largest and longest running independent professional baseball league.  Featuring 14 clubs stretching from the Atlantic Ocean to the Mississippi River and from the Ohio River to the St. Lawrence Seaway, the Frontier League annually moves the most players into Major League Baseball organizations of any of the independent leagues.